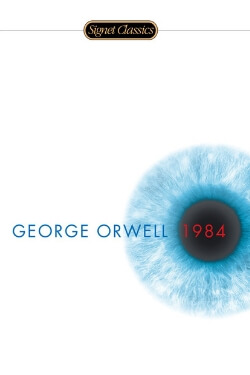 In 1984, London is a grim city in the totalitarian state of Oceania where Big Brother is always watching you and the Thought Police can practically read your mind. Winston Smith is a man in grave danger for the simple reason that his memory still functions. Drawn into a forbidden love affair, Winston finds the courage to join a secret revolutionary organization called The Brotherhood, dedicated to the destruction of the Party. Together with his beloved Julia, he hazards his life in a deadly match against the powers that be.

Big Brother is Watching You

It was a bright cold day in April, and the clocks were striking thirteen.

If you want to keep a secret, you must also hide it from yourself.

Doublethink means the power of holding two contradictory beliefs in one’s mind simultaneously, and accepting both of them.

Perhaps a lunatic was simply a minority of one.

Eric Arthur Blair was a British author who wrote under the pen name George Orwell and is best known for his books Animal Farm and 1984. Born in India, Blair served with the Imperial Police in Burma before joining the Republican Army in the Spanish Civil War. He died in 1950 at the age of 46.