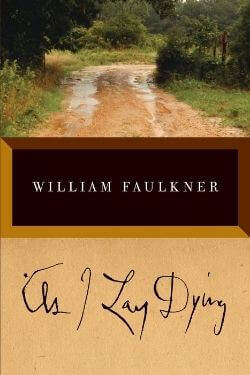 As I Lay Dying is Faulkner’s harrowing account of the Bundren family’s odyssey across the Mississippi countryside to bury Addie, their wife and mother. Narrated in turn by each of the family members — including Addie herself — as well as others; the novel ranges in mood, from dark comedy to the deepest pathos. Considered one of the most influential novels in American fiction in structure, style, and drama, As I Lay Dying is a true 20th-century classic.

Quotes from As I Lay Dying

My mother is a fish.

It takes two people to make you, and one people to die. That’s how the world is going to end.

People to whom sin is just a matter of words, to them salvation is just words too.\

William Faulkner was an American author who won a Nobel Prize in Literature in 1949. Born in 1897 in New Albany, Mississippi, Faulkner’s works include The Sound and the Fury, As I Lay Dying, Light in August, and Absalom, Absalom!. Faulkner died in 1962 at the age of 64.