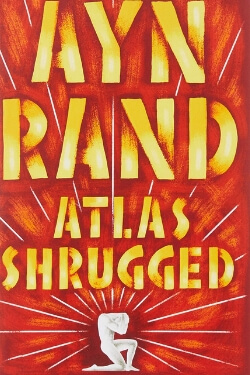 Who is John Galt? Ayn Rand’s modern classic tells the (extremely long) tale of Dagny Taggart, an heir to the Taggart Transcontinental Railroad who will do anything she can to keep her family’s railroad running. As Dagny and fellow industrialist Henry Reardon struggle to stay afloat amid public outcry against greed, industry, and productivity, Rand uses her story to explain her philosophy of Objectivism.

Atlas Shrugged is long. Like extremely long. Every one of the 1,000+ pages takes twice as long to read as a normal book because the material is so dense. It’s also a hard book to review. I found the basic story of Dagny’s fight for her railroad to be utterly compelling. Despite Rand’s long philosophical passages, I still enjoyed the first half of the book. I liked that Atlas Shrugged made you think about economics and politics.

Yet, over time, the book just wears you down. Rand does not seem to understand nuance – in characters or in her philosophy. Everything is black and white and taken to the extreme. Which means it all breaks down in reality. Her libertarian utopia is so flawed it’s laughable and her views on gender and sex are pretty bizarre. I’m glad I read it, but I don’t plan to ever read it again.

Who is John Galt? When he says that he will stop the motor of the world, is he a destroyer or a liberator? Why does he have to fight his battles not against his enemies but against those who need him most? Why does he fight his hardest battle against the woman he loves?

You will know the answer to these questions when you discover the reason behind the baffling events that play havoc with the lives of the amazing men and women in this book. You will discover why a productive genius becomes a worthless playboy…why a great steel industrialist is working for his own destruction…why a composer gives up his career on the night of his triumph…why a beautiful woman who runs a transcontinental railroad falls in love with the man she has sworn to kill.

Atlas Shrugged, a modern classic and Rand’s most extensive statement of Objectivism—her groundbreaking philosophy—offers the reader the spectacle of human greatness, depicted with all the poetry and power of one of the twentieth century’s leading artists.

Who is John Galt?

Let me give you a tip on a clue to men’s characters: the man who damns money has obtained it dishonorably; the man who respects it has earned it.

There is no such thing as a lousy job – only lousy men who don’t care to do it.

Money is only a tool. It will take you wherever you wish, but it will not replace you as the driver.

Alice O’Connor, born Alisa Zinovyevna Rosenbaum, was a Russian-American writer and philosopher best known for her philosophical system Objectivism and her novels Atlas Shrugged and The Fountainhead, written under the pen name Ayn Rand. O’Connor died in 1982 at the age of 77.