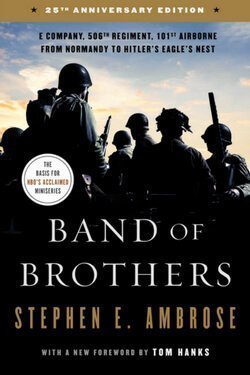 On the bloody battlefields of World War II Europe, Easy Company, 506th Airborne Division, U.S. Army, got the toughest missions. As good a rifle company as any in the world, Easy was always in the thick of the fight — from parachuting into France under a hellish crossfire early D-Day morning, to the final capture of Hitler’s supposedly impregnable Eagle’s Nest at Berchtesgaden. New York Times bestselling author Stephen E. Ambrose tells of the men in this brave unit who fought, went hungry, froze, and died for their country, and for one another — taking 150 percent casualties and earning Purple Hearts as combat pay. Drawing on interviews with survivors as well as the soldiers’ journals and letters, Ambrose chronicles the gripping true stories of these American heroes.

Quotes from Band of Brothers

“Hitler made only one big mistake when he built his Atlantic Wall,” the paratroopers liked to say. “He forgot to put a roof on it.”

No war can be won without young men dying. Those things which are precious are saved only by sacrifice.

We know how to win wars. We must learn now to win peace…

Dr. Stephen Ambrose was an American historian and author. He authored more than 30 books, including Band of Brothers, D-Day – June 6, 1944, and Undaunted Courage. Ambrose taught history at the University of New Orleans and was the founder of the National D-Day Museum. He died in 2002.