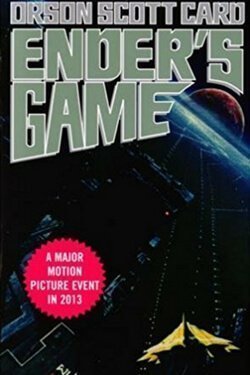 Once again, Earth is under attack. An alien species is poised for a final assault. The survival of humanity depends on a military genius who can defeat the aliens. But who?

Ender Wiggin. Brilliant. Ruthless. Cunning. A tactical and strategic master. And a child.

Recruited for military training by the world government, Ender’s childhood ends the moment he enters his new home: Battle School. Among the elite recruits Ender proves himself to be a genius among geniuses. He excels in simulated war games. But is the pressure and loneliness taking its toll on Ender? Simulations are one thing. How will Ender perform in real combat conditions? After all, Battle School is just a game. Isn’t it?

Remember, the enemy’s gate is down.

Humanity does not ask us to be happy. It merely asks us to be brilliant on its behalf.

Perhaps it’s impossible to wear an identity without becoming what you pretend to be.

Orson Scott Card is the author of the bestselling Ender Wiggin novels, including Ender’s Game, Ender’s Shadow, and Speaker for the Dead. He also writes contemporary fantasy, biblical novels and even poetry and plays. He is currently a professor at Southern Virginia University and lives in Greensboro, North Carolina.