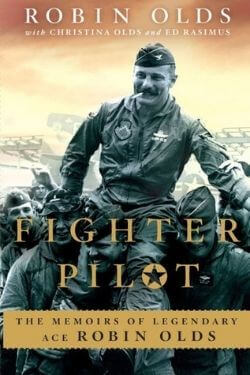 Robin Olds was many things to many people. To his West Point football coach he was an All American destined for the National College Football Hall of Fame. To his P-38 and P-51 wartime squadrons in WWII he was the aggressive fighter pilot who made double ace and became their commander in nine short months. For the pioneers of the jet age, he was the wingman on the first jet demo team, a racer in the Thompson Trophy race, and the only U.S. exchange officer to command an RAF squadron. In the tabloid press he was the dashing flying hero who married the glamorous movie star. For the current crop of fighter pilots he is best known as the leader of the F-4 Wolfpack battling over North Vietnam. For cadets at the Air Force Academy he was a role model and mentor. He was all of those things and more.

Here’s Robin’s story in his own words and gleaned from the family and friends of his lifetime. Here’s the talent and learning, the passion and leadership, the love and disappointments of his life. Few men have written on the tablets of aviation history with such a broad and indelible brush. Olds was a classic hero with vices as well as virtues, a life writ large that impacted many.

Fighter pilot is an attitude. It is cockiness. It is aggressiveness. It is self-confidence. It is a streak of rebelliousness, and it is competitiveness. But there’s something else – there’s a spark. There’s a desire to be good. To do well; in the eyes of your peers, and in your own mind.

In the military, they mostly divide themselves into four major categories: There are the ‘me-firsters,’ the ‘me-tooers,’ the ‘deadwood,’ and the ‘dedicated.

Robin Olds was an American fighter pilot, a triple ace with a combined total of 16 victories in World War II and the Vietnam War. He retired in 1973 as a brigadier general. He died in 2007 at the age of 84. His memoir Fighter Pilot was published posthumously with the help of his daughter Christina Olds and Ed Rasimus.