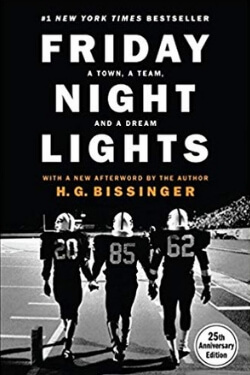 The classic story of a high school football team whose win-loss record has a profound influence on the town around them.

Return once again to the timeless account of the Permian Panthers of Odessa — the winningest high-school football team in Texas history. Socially and racially divided, Odessa isn’t known to be a place big on dreams, but every Friday night from September to December, when the Panthers play football, dreams can come true.

With frankness and compassion, Pulitzer Prize winner H. G. Bissinger unforgettably captures a season in the life of Odessa and shows how single-minded devotion to the team shapes the community and inspires — and sometimes shatters — the teenagers who wear the Panthers’ uniforms.

The inspiration for the hit television program and film of the same name, this anniversary edition features a new afterword by the author.

Let each of you discover where your chance for greatness lies. Seize that chance and let no power on earth deter you.

He saw the irresistible allure of high school sports, but he also saw an inevitable danger in adults’ living vicariously through their young. And he knew of no candle that burned out more quickly than that of the high school athlete.

I’m gonna party, see how intoxicated I can get and how many rules I can flaunt. That’s my motto.

H. G. “Buzz” Bissinger is the author of five books, including Three Nights in August and Friday Night Lights. He is a contributing editor for Vanity Fair. Bissinger currently divides his time between Philadelphia and the Pacific Northwest. Visit the author’s website →