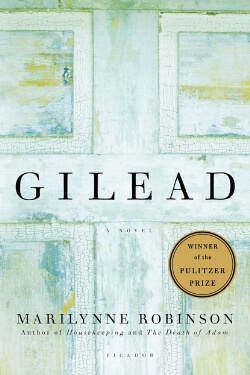 In 1956, toward the end of Reverend John Ames’s life, he begins a letter to his young son, an account of himself and his forebears. Ames is the son of an Iowan preacher and the grandson of a minister who, as a young man in Maine, saw a vision of Christ bound in chains and came west to Kansas to fight for abolition: He “preached men into the Civil War,” then, at age fifty, became a chaplain in the Union Army, losing his right eye in battle.

Reverend Ames writes to his son about the tension between his father–an ardent pacifist–and his grandfather, whose pistol and bloody shirts, concealed in an army blanket, may be relics from the fight between the abolitionists and those settlers who wanted to vote Kansas into the union as a slave state. And he tells a story of the sacred bonds between fathers and sons, which are tested in his tender and strained relationship with his namesake, John Ames Boughton, his best friend’s wayward son.

This is also the tale of another remarkable vision–not a corporeal vision of God but the vision of life as a wondrously strange creation. It tells how wisdom was forged in Ames’s soul during his solitary life, and how history lives through generations, pervasively present even when betrayed and forgotten.

This is an interesting planet. It deserves all the attention you can give it.

Love is holy because it is like grace–the worthiness of its object is never really what matters.

Memory can make a thing seem to have been much more than it was.

It all means more than I can tell you. So you must not judge what I know by what I find words for.

Marilynne Robinson is the author whose works include the Gilead series (Gilead, Home, Lila, and Jack), Housekeeping, and What Are We Doing Here. Robinson is the recipient of the 2012 National Humanities Medal. She currently lives in Iowa City, Iowa.