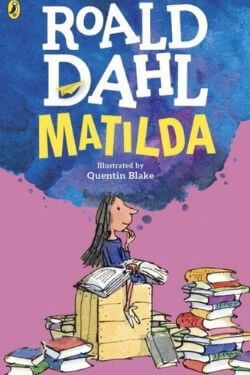 Matilda is a sweet, exceptional young girl, but her parents think she’s just a nuisance. She expects school to be different but there she has to face Miss Trunchbull, a kid-hating terror of a headmistress. When Matilda is attacked by the Trunchbull she suddenly discovers she has a remarkable power with which to fight back. It’ll take a superhuman genius to give Miss Trunchbull what she deserves and Matilda may be just the one to do it!

I’m right and you’re wrong, I’m big and you’re small, and there’s nothing you can do about it.

Never do anything by halves if you want to get away with it. Be outrageous. Go the whole hog. Make sure everything you do is so completely crazy it’s unbelievable.

So Matilda’s strong young mind continued to grow, nurtured by the voices of all those authors who had sent their books out into the world like ships on the sea. These books gave Matilda a hopeful and comforting message: You are not alone.

Roald Dahl was born in Wales to Norwegian parents and grew up in England. He worked for the Shell Oil Company in Africa until World War II, when he joined the Royal Air Force and became a fighter pilot. After the war, he moved to Washington, D.C., and became a writer. He is best known for his children’s stories, including James and the Giant Peach, Charlie and the Chocolate Factory, The BFG, Matilda, and The Witches. Dahl died in 1990 in the United Kingdom. Visit the author’s website →