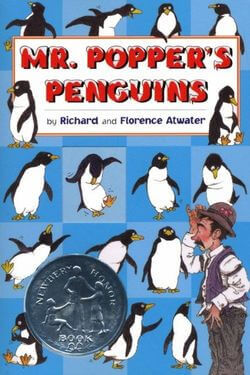 The Poppers unexpectedly come into possession of a penguin, then get a penguin from the zoo who mates with the first penguin to have 10 baby penguins. Before long, something must be done before they eat the Poppers out of house and home!

A classic of American humor, this story of a gentle housepainter and his high stepping penguins has delighted children for generations.

Richard Atwater was a newspaper columnist and a professor of Greek. He wrote Mr. Popper’s Penguins, which his wife revised and published after a stroke left him unable to speak or write. He died in 1948 at age 55.

Florence Atwater was a writer and editor. After her husband’s stroke, she rewrote portions of his unpublished children’s book Mr. Popper’s Penguins to help it become published. She died in 1979 at the age of 82.