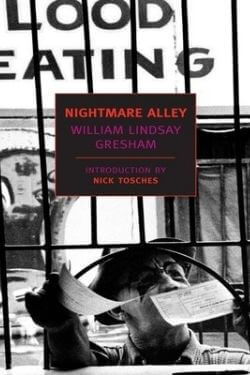 One of the twentieth century’s most darkly beautiful works of crime fiction—a story of carny life, spiritualism, and a con man of merciless resolve.

Nightmare Alley begins with an extraordinary description of a freak-show geek—alcoholic and abject and the object of the voyeuristic crowd’s gleeful disgust and derision—going about his work at a county fair. Young Stan Carlisle is working as a carny, and he wonders how a man could fall so low. There’s no way in hell, he vows, that anything like that will ever happen to him.

And since Stan is clever and ambitious and not without a useful streak of ruthlessness, soon enough he’s going places. Onstage he plays the mentalist with a cute bimbo (before long his harried wife), then he graduates to full-blown spiritualist, catering to the needs of the rich and gullible in their well-upholstered homes. It looks like the world is Stan’s for the taking. At least for now.

What sort of God would put us here in this goddamned, stinking slaughterhouse of a world?

Nothing matters in this goddamned lunatic asylum of a world but dough.

Loneliness came over him, like an avalanche of snow.

William Lindsay Gresham was an American author whose works include the novels Nightmare Alley and Limbo Tower and three nonfiction books. He died in New York City in 1963 at the age of 53.