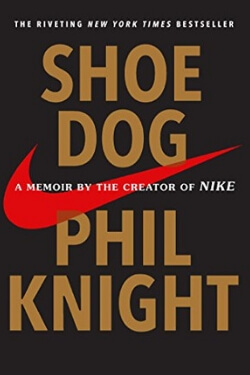 Fresh out of business school, Phil Knight borrowed fifty dollars from his father and launched a company with one simple mission: import high-quality, low-cost running shoes from Japan. Selling the shoes from the trunk of his car in 1963, Knight grossed eight thousand dollars that first year. Today, Nike’s annual sales top $30 billion. In this age of start-ups, Knight’s Nike is the gold standard, and its swoosh is one of the few icons instantly recognized in every corner of the world.

But Knight, the man behind the swoosh, has always been a mystery. In Shoe Dog, he tells his story at last. At twenty-four, Knight decides that rather than work for a big corporation, he will create something all his own, new, dynamic, different. He details the many risks he encountered, the crushing setbacks, the ruthless competitors and hostile bankers—as well as his many thrilling triumphs. Above all, he recalls the relationships that formed the heart and soul of Nike, with his former track coach, the irascible and charismatic Bill Bowerman, and with his first employees, a ragtag group of misfits and savants who quickly became a band of swoosh-crazed brothers.

Together, harnessing the electrifying power of a bold vision and a shared belief in the transformative power of sports, they created a brand—and a culture—that changed everything.

Life is growth. You grow or you die.

How can I leave my mark on the world, I thought, unless I get out there first and see it?

It’s never just business. It never will be. If it ever does become just business, that will mean that business is very bad.

I’d tell men and women in their midtwenties not to settle for a job or a profession or even a career. Seek a calling. Even if you don’t know what that means, seek it. If you’re following your calling, the fatigue will be easier to bear, the disappointments will be fuel, the highs will be like nothing you’ve ever felt.

Phil Knight is the co-founder of Nike, Inc. and the former CEO and chairman of the company. He ran track at the University of Oregon under Coach Bill Bowerman, who later became his fellow co-founder when they decided to bring Japanese running shoes to the American market. He is the author of the memoir Shoe Dog and the founder of the Philip H. Knight Charitable Foundation Trust.