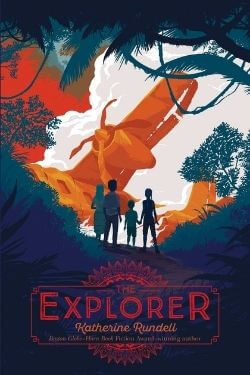 When their plane crashes in the Amazon, four children find themselves alone in the vast jungle. When they find a map that leads to a ruined city, the children find more than they were ever expecting. Although the adventure story was fun, the pacing was so slow that it didn’t make a very good read-aloud. Often, my children struggled to pay attention, and I think this book would be better suited for older children.

From Boston Globe–Horn Book Award winner Katherine Rundell comes an exciting new novel about a group of kids who must survive in the Amazon after their plane crashes.

Fred, Con, Lila, and Max are on their way back to England from Manaus when the plane they’re on crashes and the pilot dies upon landing. For days they survive alone, until Fred finds a map that leads them to a ruined city, and to a secret.

Katherine Rundell is the author of Rooftoppers, Cartwheeling in Thunderstorms, The Wolf Wilder, The Explorer, and The Good Thieves. She grew up in Zimbabwe, Brussels, and London, and is currently a Fellow of All Souls College, Oxford.