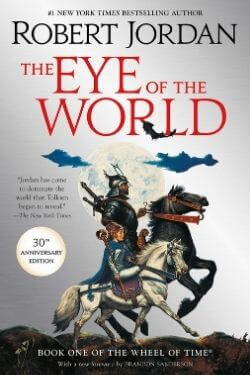 The Wheel of Time turns and Ages come and pass, leaving memories that become legend. Legend fades to myth, and even myth is long forgotten when the Age that gave it birth returns again. What was, what will be, and what is, may yet fall under the Shadow.

When The Two Rivers is attacked by Trollocs–a savage tribe of half-men, half-beasts–five villagers flee that night into a world they barely imagined, with new dangers waiting in the shadows and in the light.

Quotes from The Eye of the World

The Wheel of Time turns, and Ages come and pass. What was, what will be, and what is, may yet fall under the Shadow.

Run when you have to, fight when you must, rest when you can.

Death is lighter than a feather. Duty, heavier than a mountain.

Whether the bear beats the wolf or the wolf beats the bear, the rabbit always loses.

James Oliver Rigney, Jr., was the author of The Wheel of Time series. He also wrote under the pseudonyms Reagan O’Neal, Jackson O’Reilly and Chang Lung. He died in 2007 at the age of 58.