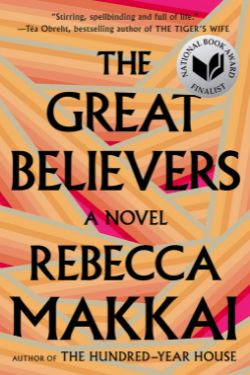 In 1985, Yale Tishman is set to acquire a treasure trove of artwork for the Chicago art gallery where he works. When his friend Nico dies of AIDS, Yale watches as all his best friends begin dying and his relationship with his boyfriend Charlie begins to deteriorate, leaving Nico’s sister Fiona as the only friend left. Flash forward to 1985, when Fiona is in Paris trying to find her daughter and coming to grips with how AIDS has altered her life.

Makkai’s brilliant writing brought the AIDS epidemic to life for me as your heart breaks reading about Yale struggling as his friends die and worrying about contracting the virus. The modern chapters about Fiona weren’t as compelling for me, but, in the end, they did have an integral message, showcasing how trauma can have repercussions that last generations.

In 1985, Yale Tishman, the development director for an art gallery in Chicago, is about to pull off an amazing coup, bringing in an extraordinary collection of 1920s paintings as a gift to the gallery. Yet as his career begins to flourish, the carnage of the AIDS epidemic grows around him. One by one, his friends are dying and after his friend Nico’s funeral, the virus circles closer and closer to Yale himself. Soon the only person he has left is Fiona, Nico’s little sister.

Thirty years later, Fiona is in Paris tracking down her estranged daughter who disappeared into a cult. While staying with an old friend, a famous photographer who documented the Chicago crisis, she finds herself finally grappling with the devastating ways AIDS affected her life and her relationship with her daughter. The two intertwining stories take us through the heartbreak of the eighties and the chaos of the modern world, as both Yale and Fiona struggle to find goodness in the midst of disaster.

Quotes from The Great Believers

It’s always a matter, isn’t it, of waiting for the world to come unraveled? When things hold together, it’s always only temporary.

You’ll never know anyone’s marriage but your own. And even then, you’ll only know half of it.

And was friendship that different in the end from love? You took the possibility of sex out of it, and it was all about the moment anyway. Being here, right now, in someone’s life. Making room for someone in yours.

I hate that we have to live in the middle of history. We make enough mess on our own.

Rebecca Makkai is an author whose works include The Great Believers, I Have Some Questions For You, The Hundred-Year House, and The Borrower. Makkai is on the MFA faculties of Sierra Nevada College and Northwestern University, and she is Artistic Director of StoryStudio Chicago.
Visit the author’s website →