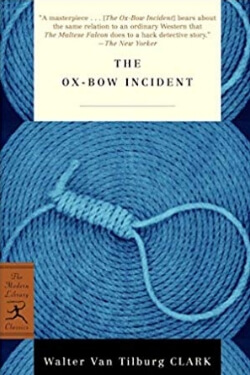 Set in 1885, The Ox-Bow Incident is a searing and realistic portrait of frontier life and mob violence in the American West. First published in 1940, it focuses on the lynching of three innocent men and the tragedy that ensues when law and order are abandoned. The result is an emotionally powerful, vivid, and unforgettable re-creation of the Western novel, which Clark transmuted into a universal story about good and evil, individual and community, justice and human nature. As Wallace Stegner writes, [Clark’s] theme was civilization, and he recorded, indelibly, its first steps in a new country.

Quotes from the ox-bow incident

Movie Trailer for the ox-bow incident (1943)

Walter Van Tilburg Clark was an American novelist, short story writer, and educator. He ranks as one of Nevada’s most distinguished literary figures of the 20th century and is known primarily for his novels, his one volume of stories, as well as his uncollected short stories. As a writer, he taught himself to use the familiar materials of the western saga to explore the human psyche and to raise deep philosophical issues.