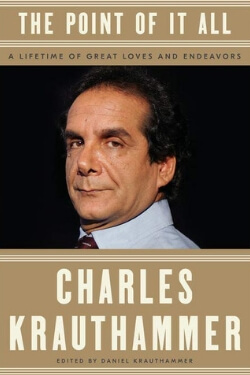 In his decades of work as America’s preeminent political commentator, Charles Krauthammer elevated the opinion column to a form of art. Whether writing about statecraft and foreign policy or reflecting on more esoteric topics such as baseball, spaceflight and medical ethics, Krauthammer was beloved not only for his penetrating wit and insight but also for his ability to identify the hidden moral truths that animate our politics and culture.

This new collection, which Krauthammer composed before his death in June 2018, features the columns, speeches and unpublished writings that showcase the best of his original thought and his last, enduring words on the state of American politics, the nature of liberal democracy and the course of world history.

The book also includes a deeply personal section offering insight into Krauthammer’s beliefs about what mattered most to him–friendship, family and the principles he lived by–all anchored by Daniel Krauthammer’s poignant eulogy for his father.

Charles Krauthammer was a political columnist and conservative political pundit. While studying medicine at Harvard Medical School, he suffered a spinal cord injury that left him paralyzed. He eventually went on to become a psychiatrist before changing careers to a journalist and political columnist. In 1987, he won a Pulitzer Prize for his weekly column in The Washington Post. He was also a weekly commentator on the PBS new show Inside Washington for 23 years. He died in June 2018 from cancer.