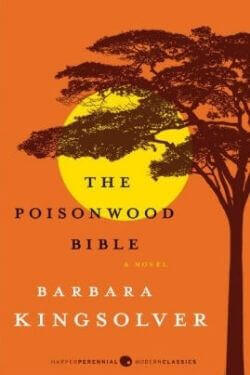 The Poisonwood Bible is a story told by the wife and four daughters of Nathan Price, a fierce, evangelical Baptist who takes his family and mission to the Belgian Congo in 1959. They carry with them everything they believe they will need from home, but soon find that all of it—from garden seeds to Scripture—is calamitously transformed on African soil. What follows is a suspenseful epic of one family’s tragic undoing and remarkable reconstruction over the course of three decades in postcolonial Africa.

The novel is set against one of the most dramatic political chronicles of the twentieth century: the Congo’s fight for independence from Belgium, the murder of its first elected prime minister, the CIA coup to install his replacement, and the insidious progress of a world economic order that robs the fledgling African nation of its autonomy. Taking its place alongside the classic works of postcolonial literature, this ambitious novel establishes Kingsolver as one of the most thoughtful and daring of modern writers.

Quotes from The Poisonwood Bible

Everything you’re sure is right can be wrong in another place.

I’ve seen how you can’t learn anything when you’re trying to look like the smartest person in the room.

God doesn’t need to punish us. He just grants us a long enough life to punish ourselves.

The power is in the balance: we are our injuries, as much as we are our successes.

Barbara Kingsolver is a novelist, essayist, and poet. Her works include The Poisonwood Bible, The Bean Trees, Demon Copperhead, and Unsheltered. She was raised in rural Kentucky and briefly lived in Africa. She currently lives in Virginia. Visit the author’s website →