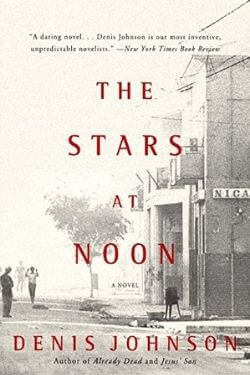 Set in Nicaragua in 1984, The Stars at Noon is a story of passion, fear, and betrayal told in the voice of an American woman whose mission in Central America is as shadowy as her surroundings. Is she a reporter for an American magazine as she sometimes claims, or a contact person for Eyes of Peace? And who is the rough English businessman with whom she becomes involved? As the two foreigners become entangled in increasingly sinister plots, Denis Johnson masterfully dramatizes a powerful vision of spiritual bereavement and corruption.

Denis Johnson was an American author whose works include the short story Jesus’ Son and the novels Tree of Smoke and The Stars at Noon. He died in 2017 at the age of 67.