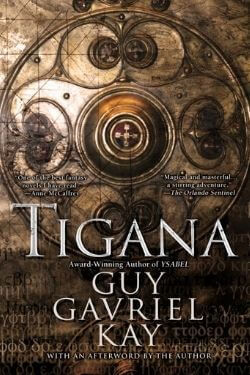 A masterful epic of magic, politics, war, and the power of love and hate.

Tigana is the magical story of a beleaguered land struggling to be free. It is the tale of a people so cursed by the black sorcery of a cruel despotic king that even the name of their once-beautiful homeland cannot be spoken or remembered…

But years after the devastation, a handful of courageous men and women embark upon a dangerous crusade to overthrow their conquerors and bring back to the dark world the brilliance of a long-lost name…Tigana.

Against the magnificently rendered background of a world both sensuous and barbaric, this sweeping epic of a passionate people pursuing their dream is breathtaking in its vision, changing forever the boundaries of fantasy fiction.

There are no wrong turnings. Only paths we had not known we were meant to walk.

Words were power, words tried to change you, to shape bridges of longing that no one could ever really cross.

In this world, where we find ourselves, we need compassion more than anything, I think, or we are all alone.

Guy Gavriel Kay is the author of numerous fantasy novels including The Fionavar Tapestry trilogy, Tigana, The Last Light of the Sun, Under Heaven, River of Stars, and Children of Earth and Sky. In 2014 he was named to the Order of Canada, the country’s highest civilian honor.