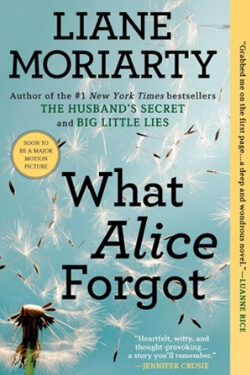 Alice Love is twenty-nine, crazy about her husband, and pregnant with her first child.

So imagine Alice’s surprise when she comes to on the floor of a gym and is whisked off to the hospital where she discovers the honeymoon is truly over — she’s getting divorced, she has three kids and she’s actually 39 years old. Alice must reconstruct the events of a lost decade, and find out whether it’s possible to reconstruct her life at the same time. She has to figure out why her sister hardly talks to her, and how is it that she’s become one of those super skinny moms with really expensive clothes.

Ultimately, Alice must discover whether forgetting is a blessing or a curse, and whether it’s possible to start over.

Quotes from What Alice Forgot

But maybe every life looked wonderful if all you saw was the photo albums.

She was busy thinking about the concept of forgiveness. It was such a lovely, generous idea when it wasn’t linked to something awful that needed forgiving.

Just because a marriage ended didn’t mean that it hadn’t been happy at times.

The Things We Wish Were True
Marybeth Mayhew Whalen