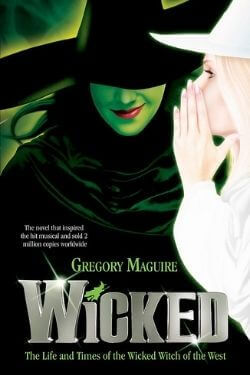 This is the book that started it all! The basis for the smash hit Tony Award-winning Broadway musical, Gregory Maguire’s breathtaking New York Times bestseller Wicked views the land of Oz, its inhabitants, its Wizard, and the Emerald City, through a darker and greener (not rosier) lens. Brilliantly inventive, Wicked offers us a radical new evaluation of one of the most feared and hated characters in all of literature: the much maligned Wicked Witch of the West who, as Maguire tells us, wasn’t nearly as Wicked as we imagined.

One never learns how the witch became wicked, or whether that was the right choice for her~is it ever the right choice? Does the devil ever struggle to be good again, or if so is he not a devil?”

Remember this: Nothing is written in the stars. Not these stars, nor any others. No one controls your destiny.

Where I’m from, we believe in all sorts of things that aren’t true… we call it history.

Gregory Maguire is a former professor and the author whose works include Confessions of an Ugly Stepsister, Lost, Mirror Mirror, and The Wicked Years. His novel Wicked was the basis for the Tony Award-winning Broadway musical. He currently lives near Boston, Massachusetts. Visit the author’s website →