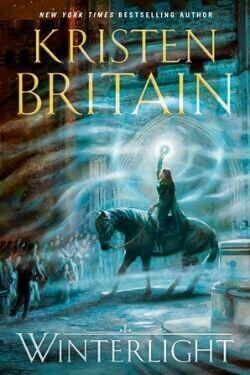 I received a complimentary copy of this book from DAW through NetGalley. Opinions expressed in this review are completely my own.

In the 7th book in the Green Rider series, Sir Karigan G’ladheon is making her way back to Sacor City after her eventful mission to the North. Although plagued by nightmares and self-doubt after being tortured, Karigan must continue to risk all for king and country as the Second Empire makes a final bid to attack the kingdom.

Fantasy isn’t generally my genre of choice, but I got hooked on the Green Rider series after the birth of my youngest, reading all six (gigantic) books in about a week. I’ve heard that this is the penultimate book in the series, and I have to admit that I am just as hooked now as I was when I started. In Winterlight, fans of the series will be pleased as Britain keeps up a constant stream of action while diving into the psychological toll of Karigan’s many adventures. While the loose threads from the other books are mentioned, the focus is on Karigan and King Zachary taking on the Second Empire.

This seventh novel of the Green Rider series follows the adventures of messenger, magic wielder, and knight Karigan G’ladheon as she fights to save king and country from dark magic and a looming war.

After her capture at the hands of Grandmother and the Second Empire, Karigan G’ladheon is making halting progress towards recovery. Karigan takes on increasingly dangerous missions, haunted by the specter of her torturer, Nyssa, and sinking ever further into the mire of her recollections of the past and the losses she’s sustained.

Meanwhile, the forces of the Second Empire are moving on Sacoridia and their primary target is a vulnerable garrison that guards a crucial mountain pass. Faced with new fatherhood and a country on the verge of war, King Zachary sends a contingent of soldiers and Green Riders to the pass–but his own recovery from the events of the north is not yet complete either.

Reunited with her fellow Riders at the pass, Karigan takes on a leadership role, but quickly finds that the Riders are not as she last left them. As tension mounts and war draws ever closer to the heart of Sacoridia, Karigan must discover what it truly means to be a Rider and a hero of the realm–and what sacrifices must be made to truly heal from her past.

Kristen Britain is the author of the Green Rider series. She currently lives in Maine. Visit the author’s website →